Next day saw us getting back into gear at the Volksbühne. But the initial idea to all meet up there ran into a snag, or rather, the teams had other ideas, other independant street-art activities to perform... M&C went off to the Greenhouse where Zoë was hanging out, and reported on that project later, Dialogist-Kantor had an own mysterious agenda which we were to hear of later, Viviane & Aldo were off somewhere else, Patrick (brought us there) and Irene were doing practical things and we would meet up... so we were but a small équipe, Julien, Lise LL and myself to do the hand-held walkabout to the second venue GlogauAir, where we had a kaffeeklatsch rendez-vous. 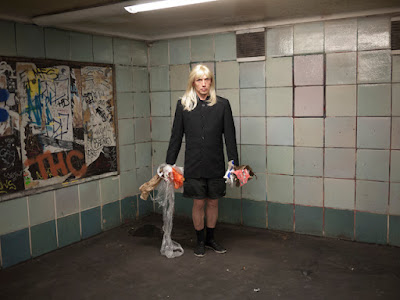 Julien had donned his blonde wig, and we taped his hands with double-sided tape and started our walk from Rosa Luxemburg into the city... past chiqui-mikki galleries gearing up to the onslaught of visitors being chaffered around in sponsor-BMW’s all the way from Bavaria... the local auto-industry only could provide a few stretch-trabbi’s; not nearly enough... anyway, we headed towards the Karl Liebknecht building and then past the resistance memorial into the main thoroughfare going to Alexanderplatz... along the way Julien would stoop and get some lost piece of discarded crap to cling onto his hands, cuffs, lower extremities whatever... Wide boulevards and searing heat soon got to us and we headed down sideways (along a piece of old city wall, which sort of surprised me) for the Spree, where we thought some cool watery breeze might make the trip more enjoyable – we were going to go all the way on foot, collecting rubbish, but in the end we decided a short trip in the U-bahn might save us some energy for later... and cool us off – which it did... the passengers looked somewhat quizzical at this tall blonde with all that dirty smelly garbage in her/his hands, and one could see it did not always meet with approval.


We emerged near the Landwehrkanal and didn’t have so far to go but there was an extended market going on and of course that did slow us down quite a bit – I broke ranks to do some shopping but in the end the GlogauAir was still closed when I got there, so no rush... but there were already some of our group and it didn’t tka long before we were all present, the crew from GlogauAir arrived and things started rolling...